To the FOSS Community,

The current global user count of freenode exceeds the user count of the 2nd-6th largest networks, combined. I am pleased to announce, the plan to destroy freenode has failed! 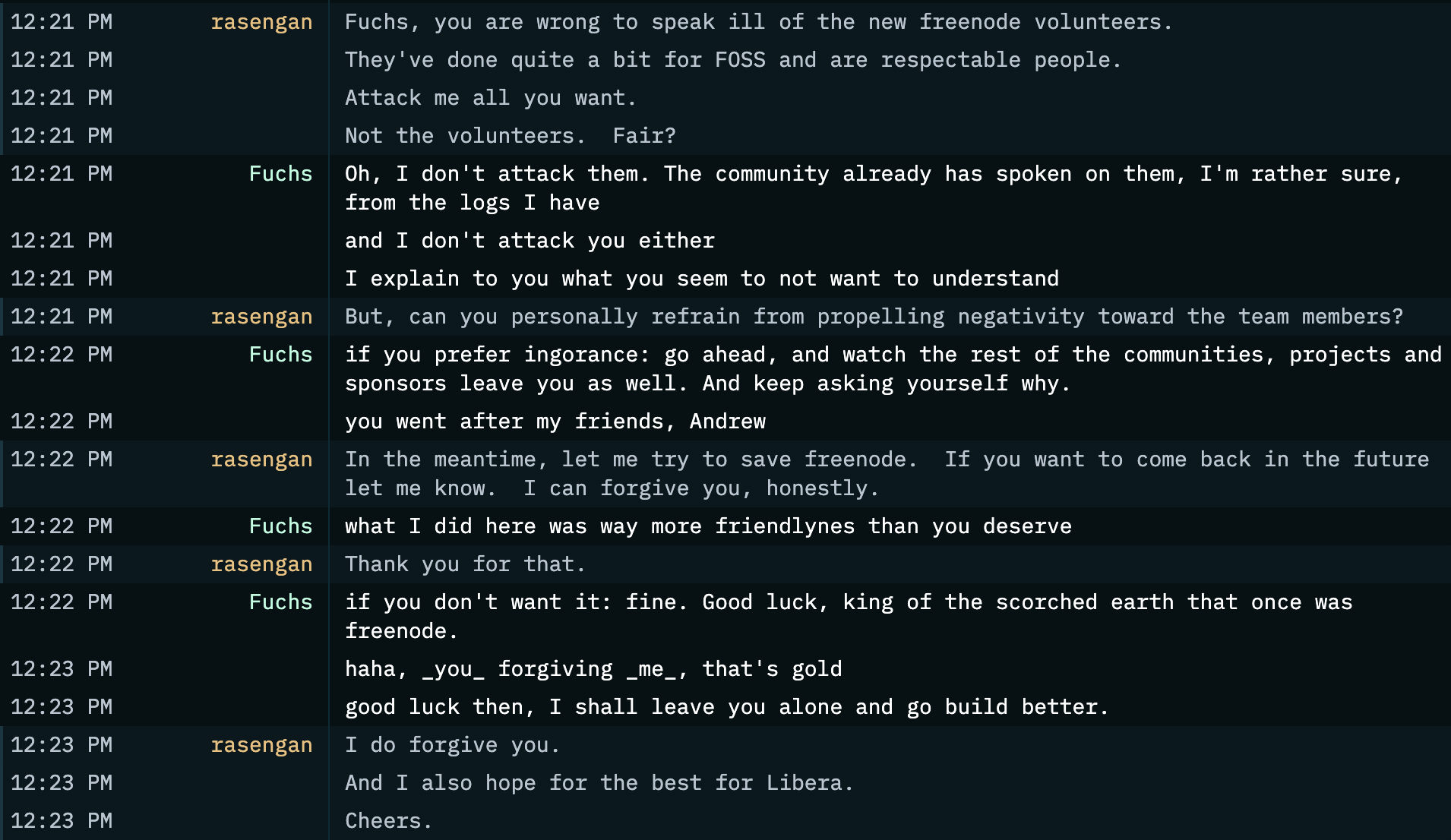 We’re moved by the tens of thousands of messages of love and support we have received, but moreover, we expected no less from the most objective and fair community in the world - the FOSS community. The silent majority has spoken.

To the few projects leaving based on falsehoods

freenode has been the home for the entire FOSS community for over 20 years. Fracturing the community only hurts users and FOSS. Your users don’t wish to migrate. Stop forcing them.

Freenode is more than just an IRC network. It is the home for our users. You came here because of the freenode users, not the other way around, and now you try to destroy it from the inside.

You’re using your FOSS projects as a trojan horse to pursue a political cause based on falsehoods on IRC. Please stop and reflect on what you’re doing. If you wish to continue, then it is what it is - an illness.

(A user, representing personal views, asks questions based on knowledge from joepie91 who does things for the “lulz”)

A note on cancel culture

I have also received hundreds of reports from project leads on freenode that they are being harassed and are at risk of being canceled if they do not leave, to Libera. This activity does not belong in FOSS. Stop it.

A moment of silence and salute to prawnsalad

One of the casualties that IRC has, unfortunately, suffered yesterday was of prawnsalad. We salute his efforts, as without him, webirc and webircv3 wouldn’t be where it is, today. Most major networks have a web irc platform thanks to prawnsalad, including freenode.

Freenode is freenode, and freenode is FOSS. freenode is you. It’s not a former staff team holding onto a position for 20+ years without any progress other than asking every group to manually go through them to get vhosts, as a gatekeeper. As such, we will be enabling the features that were built to make freenode better years ago and were simply never implemented. HostServ is coming!

A word on policies

To protect the community, we’ve updated our policies and are continuing to upgrade our systems to better reflect the state of freenode in 2021. With our strong team, we’ll be able to take freenode and IRC further.. It’s a new era for freenode and IRC and a great era for FOSS and open innovations!

Thanks again for choosing freenode, the home of the FOSS community.

On behalf of freenode and the entire freenode team,

previous article, all, next article